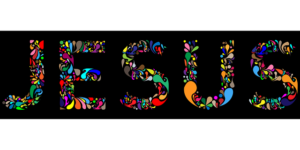 The name. One particular name, Jesus, is probably on the lips and in the thoughts of millions of people  more  at this time of year than at any other. That’s because it’s getting close to our annual celebration of Christmas.

Although the holiday isn’t named after Jesus, “Christmas” certainly represents what he came to accomplish in God’s plan to save lost humanity. Here’s an interesting article that gives more detail about the origin and meaning of the word Christmas, as well as other information. https://www.whychristmas.com/customs/25th

What does the name Jesus mean?

Jesus, a common name for a unique person.

You might think that the most unique person in human history would be given a unique name. Not so. The scriptures refer to several persons by the name Jesus. As a matter of fact, the person who led the Israelites into the Promised Land was named Joshua (Yeshua). There are several other references to people with the name Jesus in the New Testament. This link will give you lots of detail about that and many other ideas about the name we hold so dear. https://www.thegospelcoalition.org/blogs/kevin-deyoung/5932/

Why was our savior given the common name of Jesus? I believe there a couple of explanations for this.

First, the name would describe the nature of who he was and the unique purpose for which he came into the world. While the name was not unique, he came and completed the unique task that only the Son of God was capable of doing. In his body he suffered and died for our sins and was raised to life again to save us from the penalty of our sin and secure eternal life for us through his resurrection from the dead.

I also think our Lord was given a common name because he came into the world to identify with common folks like us. A common name would be consistent with the way he is described Isaiah 53:2 “He has no stately form or majesty that we should look upon Him. Nor appearance that we should be attracted to Him.”

In that magnificent passage in Philippians 2 Paul writes of Jesus abdicating his rights as God to serve us, ” Although He existed in the form of God, did not regard equality with God something to be grasped, He emptied himself, taking the form of a bond-servant, and being made in the likeness of men. And being found in appearance as a man, He humbled Himself by becoming obedient to the point of death, even death on a cross.” vv.6-8.

Our Lord took a common name and identified with us and with our sin and did only what He could do. Jesus, magnificent name. Praise God, He identified with me and my need.

I’ve always felt that we need to handle our references to God very carefully. I tend cringe and duck for cover when I hear someone using terms such as God, Jesus, Jesus Christ, my Lord, etc. in a flippant or cursing manner. I also realize that calling myself a Christian and living unworthily of that name is  disrespectful of the name. Jesus is the name given to the Son of God and that name and others referring specifically to him deserve our respect and honor. Why? Because that name represents the character of the ultimate and Highest Being in our universe, and heaven itself.

The name Jesus represents the power, majesty, love, wisdom, beauty, knowledge, mercy, forgiveness, and judgment of God Almighty. So, the name is powerful when used correctly, but using it wrongly speaks of our disrespect and lack of wisdom. The Name represents the character of God, and although he gave his only begotten a common name, the name of Jesus is to be respected and honored for the powerful name it is. Jesus represents our forgiveness, the power of God to raise the dead, the power to live a godly life, and the hope of eternity in heaven with God.

I’ve selected a few scriptures for you to think about when you think about Jesus and the other names we use for God.

Exodus 20: 7, ” You shall not take the name of the Lord your God in vain, for the Lord will not leave him unpunished who takes His name in vain.”

Psalm 8: 1, ” O Lord, our Lord, How majestic is your name in all the earth. Who has displayed your splendor above the heavens!”

Psalm 111: 9, ” He has sent redemption to His people; He has ordained His covenant forever; Holy and awesome is His name.”

Acts 3:16,  ” And on the basis of faith in His name, it is the name of Jesus which has strengthened this man whom you see and know; and the faith which comes through Him has given him this perfect health in the presence of you all.”

Acts 4:12, ” There is salvation in no one else; for there is no under name under heaven given among men, by which we must be saved.”

Philippians 2: 9-11, ” Therefore also God highly exalted Him, and bestowed on Him the name which is above every name. That at the name of Jesus every knee should bow, of those in heaven, and on earth, and under the earth, and that every tongue should confess that Jesus Christ is Lord, to the glory of God the Father.”

“He came to us in human form as Jesus of Nazareth. The “good news” is about the most significant event in human history as God became flesh and revealed himself as a man. The New Testament is about Jesus, and apart from him, there would be no reason for its existence.” Heaven’s Currency, p.104   https://www.cosdavis.com/product/heavens-currency-investing-in-the-things-that-matter-most 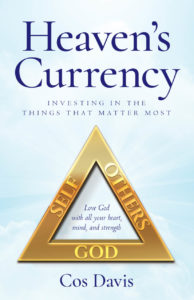 I invite you to take a moment to worship Him whose name is Jesus.

Christmas, How Much Does It Cost?